In the near future, new satellites such as Meteosat Third Generation (MTG) and Metop - Second Generation (Metop-SG) will provide advanced capabilities and valuable data for monitoring fires and their impacts. This three-part case study will introduce upcoming data products from MTG and Metop-SG in the context of the summer wildfires which occurred in southern Italy and Greece in early August 2021. In this part, we will introduce you to new capabilities in monitoring the active fires as part of the fire life cycle with data products from MTG and Metop-SG.

MTG will see the launch of six new geostationary satellites from 2022 onwards. The satellite series will be based on 3-axis platforms and comprise: four imaging satellites (MTG-I) and two sounding satellites (MTG-S). The full operational configuration will consist of two MTG-I satellites operating in tandem, one scanning Europe and Africa every 10 minutes, and the other scanning only Europe every 2.5 minutes, and one MTG-S satellite. With MTG, the data will have better spatial, temporal & radiometric resolution, so even smaller fires will be detected.

The instruments covered in this case study in order of appearance are Metop-SG’s METimage radiometer, MTG’s Flexible Combined Imager (FCI), Metop-SG’s Sentinel-5 Ultraviolet Visible Near-Infrared Shortwave (UVNS) spectrometer, followed by MTG’s Sentinel-4 UVNS spectrometer. While data from MTG and Metop-SG is not yet available, we will be introducing existing data products and explaining how new capabilities will arise from these upcoming satellites. 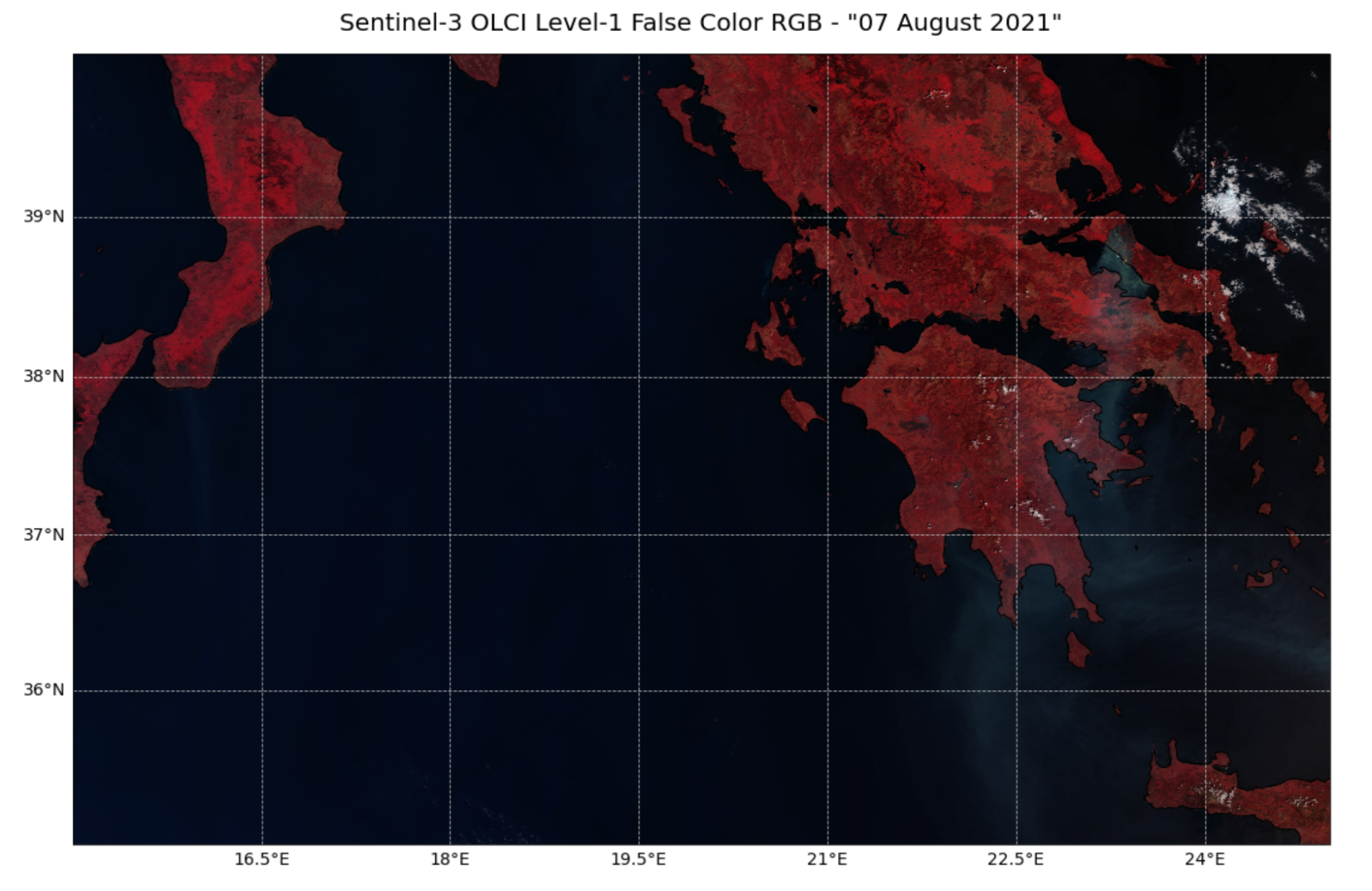 The Fire Radiative Power Pixel (FRPPIXEL) product records information on the location, timing and fire radiative power (FRP, in megawatts) output of wildfires detected every 15 minutes across the full MSG disk at the native spatial resolution of the SEVIRI sensor. This enables emergency responders to pinpoint where active fires are burning and have information about how intense these fires are.

Figure 2 shows the fire radiative power in megawatts (M W) over Italy and Greece from 5 August 2021. The proxy data source is the near real-time MODIS Thermal Anomalies/Fire locations 1km FIRMS V0061 (MCD14DL) dataset. While the fire radiative power data is continuous, this visualisation groups them into categories based on their intensity. High intensity fires with fire radiative power of 120 to 500 MW are shown in bright red, while low intensity fires of up to 30 MW are shown in blue. The fires on Evia island are visible in bright red whereas most of the fires in southern Italy are colored blue as they are lower in intensity. 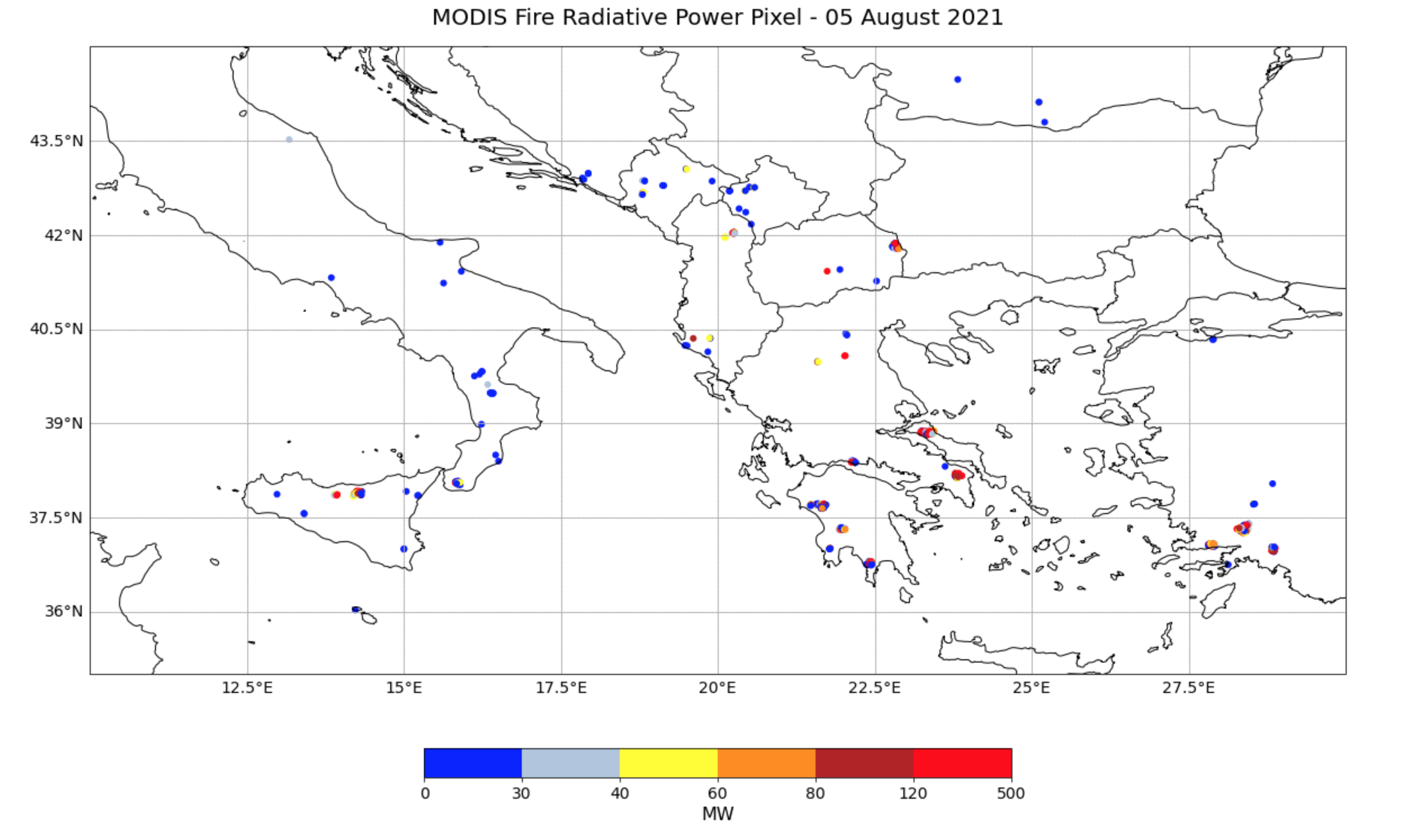 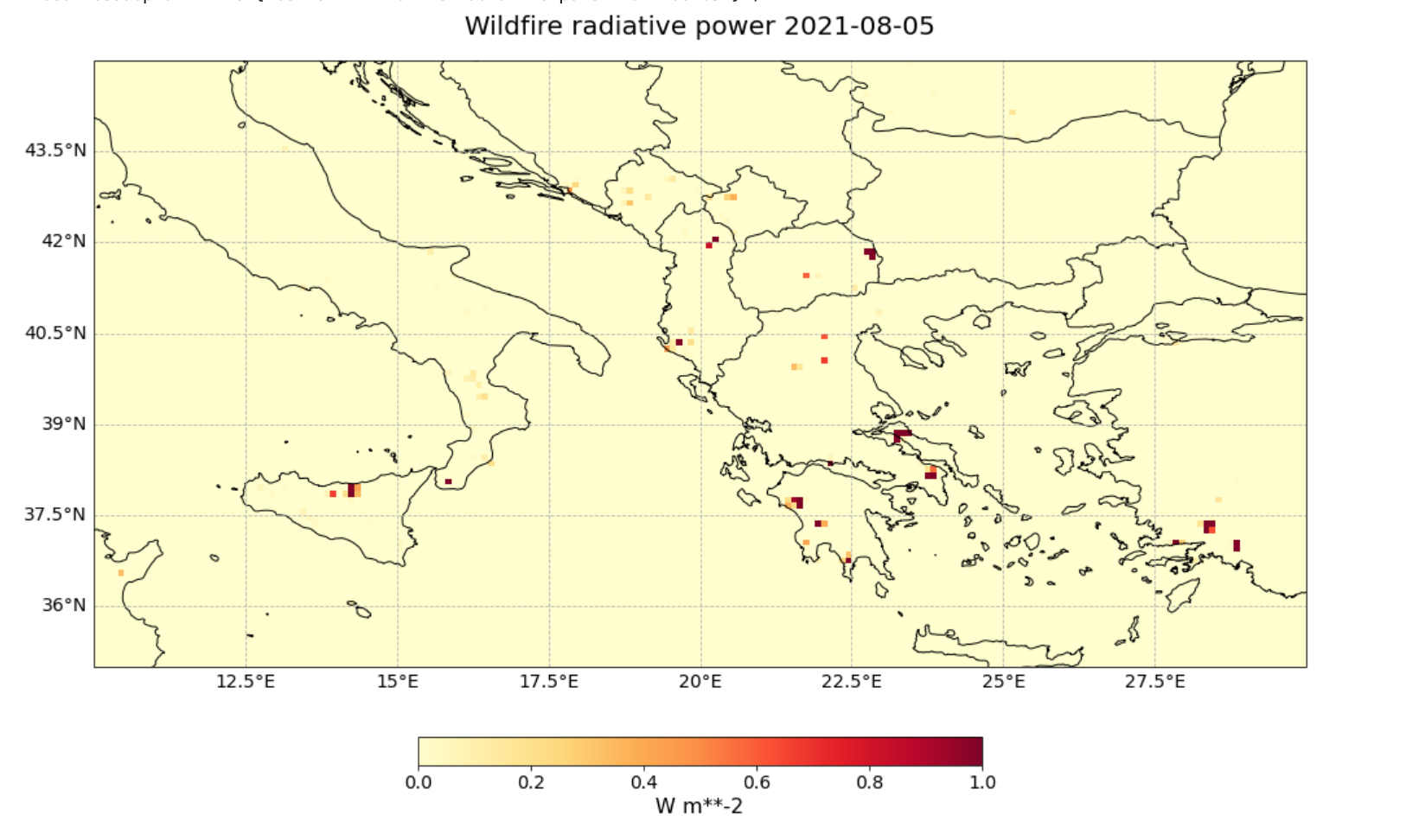 Monitoring trace gases and aerosols is important for understanding smoke transport patterns. Metop-SG A will carry the Copernicus Sentinel-5 UVNS spectrometer for measurements of trace gases which will also improve air quality forecasts produced by CAMS. The UVNS instrument will provide ultraviolet aerosol absorption index information as a Level 2 product. The Greece and Italy wildfires caused an elevated presence of aerosols in the atmosphere as shown by the higher values of the Ultraviolet Aerosol Index Level 2 product in Figure 4. The proxy data comes from Sentinel-5P, the precursor instrument for Sentinel-5.

Compared to its predecessor, GOME-2, the major breakthrough of Sentinel-5 will be a drastically increased spatial sampling at a sampling distance of 7km, and the extension of measurements into the near and short-wave infrared, providing information about aerosols, as well as methane and carbon monoxide in the planetary boundary layer. 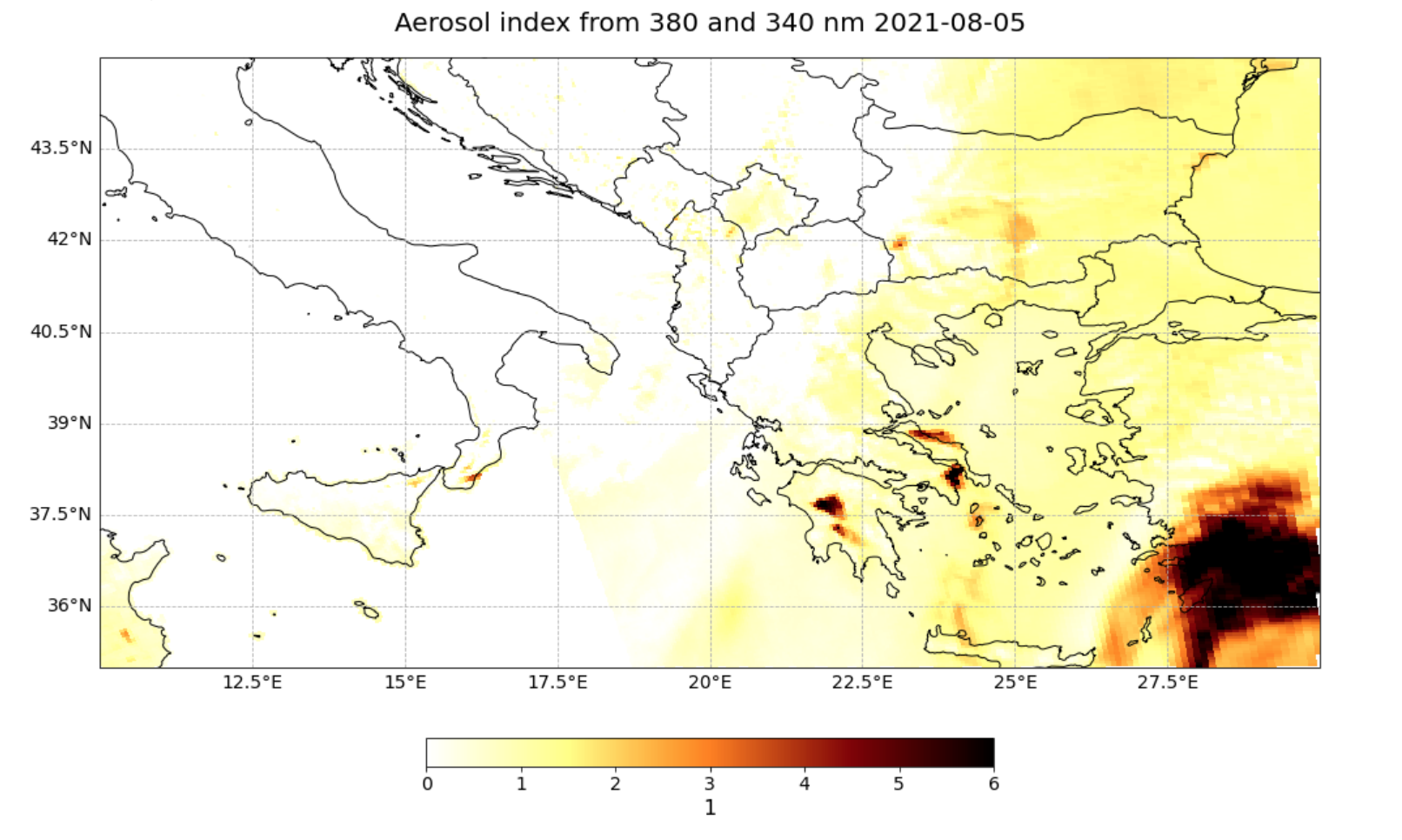 Figure 4. Ultraviolet Aerosol Index (UVAI) Level 2 product from Sentinel-5P TROPOMI over Italy and Greece recorded on 5 August 2021.
Learn how this aerosol index plot was made. 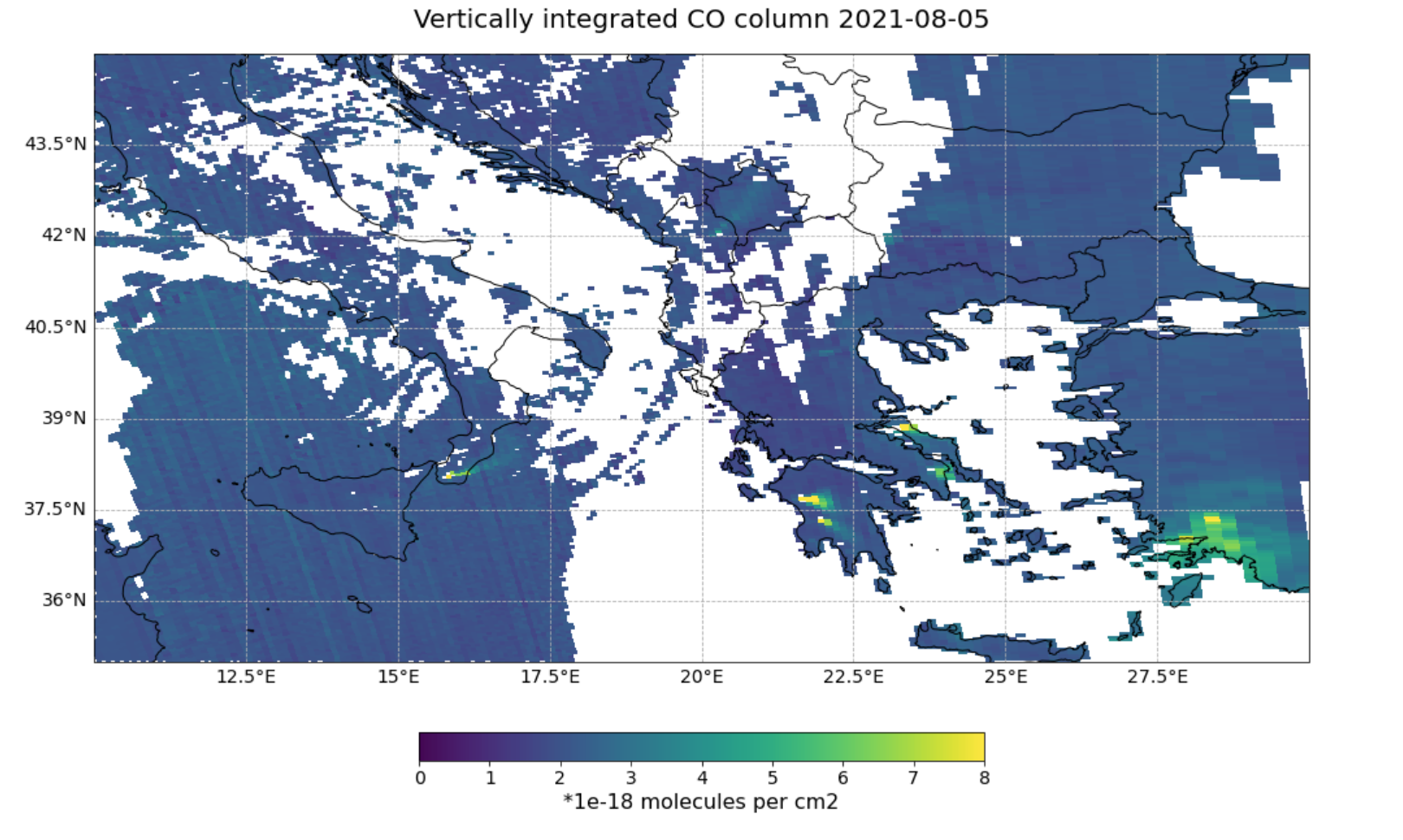 Nitrogen dioxide is another useful indicator of smoke presence and transport. Figure 6 shows an animation of simulated nitrogen dioxide Level 2 data from Sentinel-4 with hourly data for 24 hours on 7 August 2021. Elevated levels of nitrogen dioxide are visible over Italy and Greece where the FRP data shown in Figures 2 and 3 indicate fire locations.